System(s): PC, PS Vita – This review based off of PC version

DLC: Yes, all DLC packages included in this review

When I decided to give this game a go, I had no idea what I was getting into. I blindly opened up my stream and started playing. Within the first few minutes I was greeted with a visual novel where certain parts were slightly animated. Those parts happened to be parts of female anatomy. 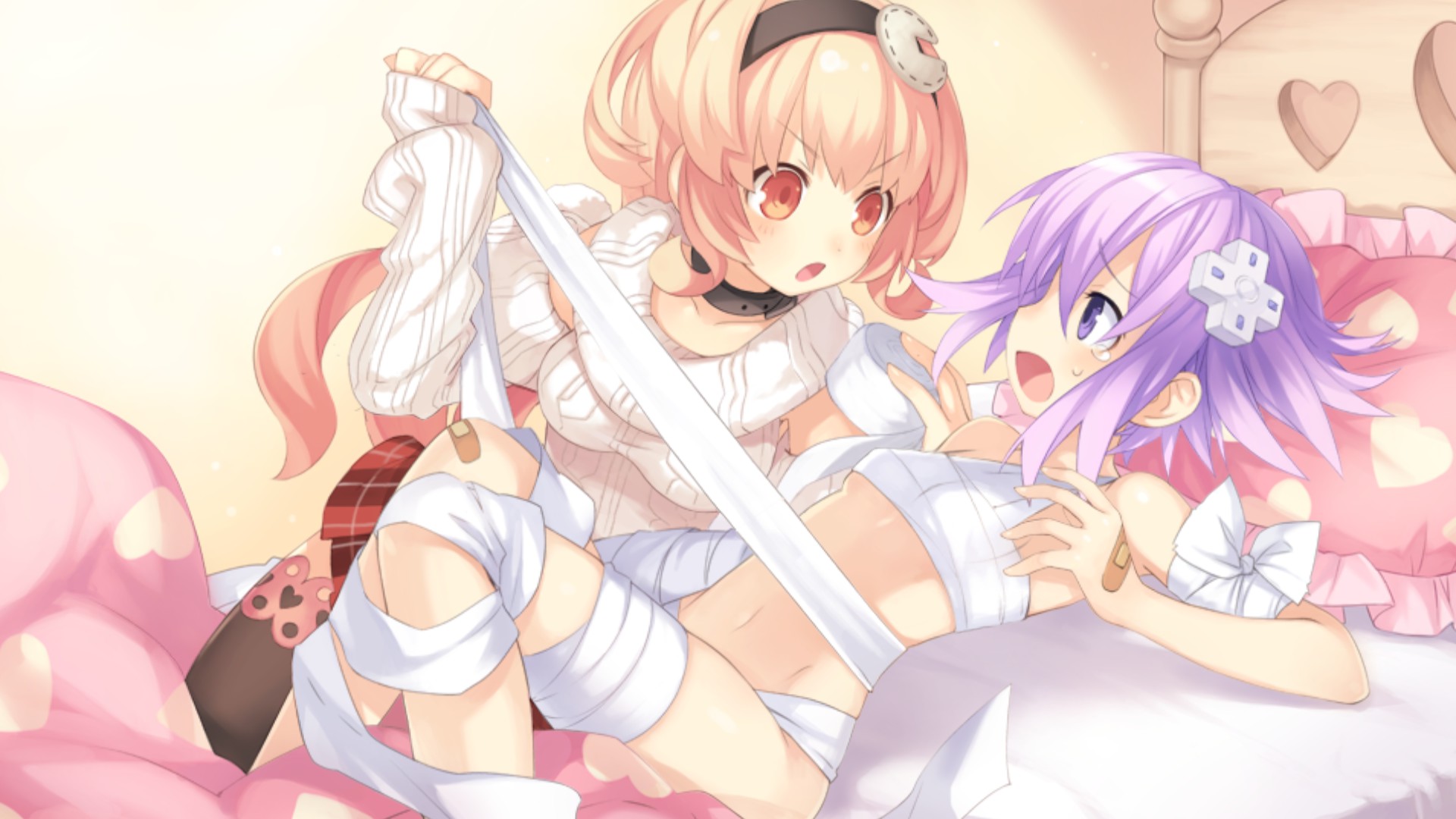 While there is no nudity in this game, it likes to push the boundaries with ‘eye candy’. This may have resulted in a few awkward questions from Twitch viewers’ wives. Sorry about that, folks!

After the short cinematic and visual novel intro to the game, I was dropped into a dungeon-crawling action RPG. I guided the main character, Neptune, through the lands of Gameindustri trying to recover her memory (hey, a game where the main character gets amnesia! Never seen that before!) and help reactivate the magical tome Histoire.

The combat at early levels provides a whole bunch of tooltips and explanations of mechanics that don’t really become relevant until many hours later in the game when you level up enough to unlock the features. After you get some levels under your belt, you open up a world of customization, including strategies for balancing the combat mechanics between Rush attacks (focus on number of attacks, which raises your EXE drive — similar to FFVII’s Limit Breaks), Power attacks (focus on outright damage), and Break attacks (focus on damaging the opponent’s Guard gauge – while Guard remains, target takes reduced damage). You also unlock what I call friendship abilities. As you have members in the same party together, they level up their “Lily Rank”, which unlocks certain benefits, like increased XP, reduced damage, etc. when paired up with that character. Using these character combos can help you focus on what you need for a particular fight or when grinding.

The combat itself is nothing innovative. Move a certain amount, do your attacks (each character gets 4 attacks–one base, and then can choose the next three based on the combos you have set up). Each weapon has a certain range and spread. Unfortunately, I never found a way to figure out what that range and spread is until I actually got into combat. When you get a new weapon for the same character, it may drastically change their ability to do Area Effect damage.

There are no random encounters. In the dungeons you enter, the enemies all wander in a small area and you can typically avoid fights (if you want). Regular enemies will see you and run towards you, but most of the time you run around them and they will not catch up to you. If you want to attack something, if you hit attack and hit the enemy before it hits you, you will start off the combat with a Symbol Attack, basically meaning you get to hit first. Otherwise, if they hit you, they get a Surprise Attack.

While going through dungeons, there are two types of items littered around the maps. One looks like a ? and the other a little crystal. The ?’s are harvest items and will replenish every time you enter the dungeon. The crystals are one time pickups and usually include plans and gear. There is also one ‘hidden’ item on every level of each dungeon. When exploring, you can use a search ability that will send out an annoying “ping” sound and a purple circle will extend out from the character. If the hidden item gets hit by the circle, it appears and you can pick it up.

The “Re;birth” part of this game includes the remake system where you can remake the game how you want, including weakening or strengthening enemies, adding new dungeons, changing the items or enemies within the dungeons, etc. To do this, you need the plan for the change, which you usually find from NPCs around the world map or from the dungeons. Once you get the plan, you have to find the ingredients. Most of the time, these are drops from enemies in particular dungeons or from harvest spots in the dungeons. Once you have the parts, you can craft the plan from the menu and turn on the feature if you have enough memory. Memory gets extended upon story chapter completion or defeating certain dungeon bosses.

The ingredients listed for a plan will not tell you where they come from. Some of them are named as such that it’s easy to guess, but others will have you referring to a wiki or game guide to determine. Unfortunately, there are some plans locked to certain chapters and if you miss them, you will be locked out of a chain of dungeons, which in turn locks you out from unlocking certain items and weapons on that playthrough. This happened to me and was a major sore spot for me as I neared the end of the game.

After defeating the game, you can start a New Game+ and continue with the same levels and skills as before. On subsequent playthroughs, you can do the Colosseum battles and unlock dungeons you missed on the first playthrough. The max level for characters is 999. I reached the low 90s on my first playthrough.

At any one time, you can have six active characters: three on the front line, and three in the back that you can switch to. Near the end of the game, you will have a very large roster of characters to switch between — especially if you have the DLC — which adds two new characters. Luckily, all the characters in your party get XP when you defeat monsters, so characters don’t fall too far behind.

As for the characters, you have a wide range of body types, voices, and personalities, but as far as combat goes, almost all of them are front line melee attack characters. There is one dedicated healer, a couple of spell casters, and the rest are melee. Some of the advanced unlock options include ranged attackers, but you typically won’t have access to these on your first playthrough. The game could definitely have benefited from having more ranged damage characters and more variety in their melee characters.

The visual novel aspect to the system was pretty fun though, as the character interactions were entertaining.

Some of the enemies you fight in the dungeons are just weird. Floating screenshots, Otakus, weird half-men half-planes…

The storytelling is tongue-in-cheek humor as your main character breaks the fourth wall periodically and the characters get into odd situations. The overarching story is about the CPUs (Console Patron Units) of Gameindustri as they fight in the age old battle of the Console Wars. They must learn to work together to defeat a new evil threat. Hijinks ensue!

The story is broken into eight chapters and overall the story moved along nicely;  you always knew what your goal was for the chapter and how to play it out.

The DLC for this provided two characters that you can put into your party, but otherwise don’t show up in the game at all (They are not referenced or talked about). Additional dungeons and the Colosseum are included, along with a plethora of plans for outfits and gear.

This game was a pleasant surprise and was nice to see a turn-based action RPG. The crafting system was more annoying than it was fun. I enjoyed the humor and character interactions. However, the dungeon crawling is uninspired and reuses the same palette multiple times. Definitely worth playing through once, but I don’t feel the new game+ is enough to keep me going. A Brief Guide to Hogwarts’ Houses